Please note, our happy half-hour will begin at 6:00 pm, with our speaker presenting at approximately 6:30pm.

GENERAL INFORMATION: All participants will sign up via Eventbrite (using the button to the right).  A link to the meeting will be emailed to all participants approximately 30 minutes prior to the meeting start time.  Registration for this meeting will close at 5:00pm on July 11th.  This month’s meeting is free; however, donations are appreciated and can be given via Eventbrite during sign-up or via PayPal to scgs.mgmt@gmail.com. For those who have not used Zoom, it is free to sign up and you do not need a paid account to attend the meeting.  We suggest logging in at least 10-15 minutes early if this is your first time using Zoom or you have not recently updated your Zoom account.  SCGS officers will be standing by to assist as best we can. If you have any issues, please email us at scgs.mgmt@gmail.com.

Please note, the meeting may be recorded for future use.

Attend Next Meeting
Make a Donation! 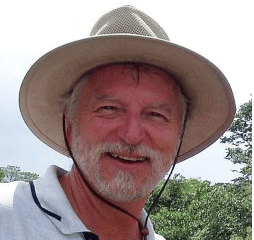 The 250-km-long northeast-trending Garlock fault in southern California bounds extension on the north from right-laterally slipping blocks to the south. Multiple paleoseismic sites have been published for the central and eastern segments of the fault, but only Twin Lakes on the western segment. As part of the geological constraints investigations for planning of Tejon Ranch’s Mountain Village project, trenching investigations at Campo Teresa, 25 km west of Twin Lakes generated data for the timing of the last 2-4 rupture events. Two trenches exposed the northern and southern fault traces within a narrow stepover. The exposures allowed us to constrain displacements and ages based on two radiocarbon dates from colluvial deposits; two events since 1710±40 ybp and likely two events 1710-4100±40 ybp. The MRE and penultimate events appear to be similar 4-m left-lateral events on the southern fault, each with about 2 m of vertical separation on the northern fault.

Eldon Gath, President of Earth Consultants International, is a consulting engineering geologist with over 40 years of practice. Eldon is a 1978 graduate of the University of Minnesota, Institute of Technology, with a BS degree in Geology, and has been in graduate school ever since moving to California. He was President of the South Coast Geological Society and the Association of Environmental and Engineering Geologists, U.S. National Group Leader and North American Vice-President of the International Association for Engineering Geologists and the Environment, and the Richard Jahns Distinguished Lecturer in Applied Geology for the Geological Society of America and AEG. This is his eleventh talk to SCGS since 1984.